Our first try was in the microlab. We thought the lighting could help, so we tried arranging the lights to make them as even as possible.

We soon discovered that we would have our own shadows projected on the person’s body whenever we were scanning, so we first tried diffusing the light, and then repositioning to make it as triangular as possible.

Dylan was making pretty decent scans, but Shivani and I couldn’t get anything right. We also made a few masterpieces, such as this Octopus Marcela that Shivani made: 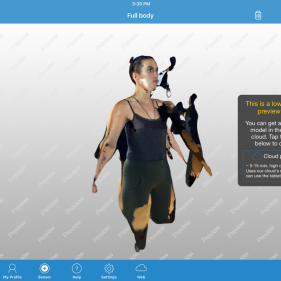 I figured out I would always lose the position when I was scanning the arms, on the side, so I tried figuring out what could be happening, with no success. 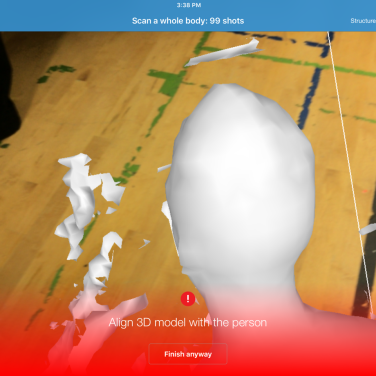 I first thought I was moving too much, so I tried being more stable when I was scanning, but it didn’t change anything. Then, I figured out I was moving in a circle around their bodies, so I tried making more of an ellipse, keeping the same distance through all the scanning, but again, I would receive “Align 3D model with the person” warning every time I was scanning the arm.

At some point, Dylan told me to keep the shoulders in sight whenever I was scanning the arms, and that helped, but I wasn’t able to finish any scans anyway. We finally moved to the light-filled room full of windows on the corner of the floor (forgot to take pictures of that part, sorry) to see how the light would respond. Again, Dylan had a very decent scan of myself, and I wasn’t able to finish any.

These are the scans that Dylan did. The one on the right was in the microlab, with the fluorescent lights on the side, and the one on the left was in the corner room. The difference in the color is very clear, though I don’t think the light had a big influence in the quality of the scans.

We gave up for the day, but scheduled to meet again. I had office hours with Matt, but it was hard to describe what could be wrong without the scanner itself. Anyways, he gave me a hint on a good room to do it, and that was where we went in the other day.

I already had a good enough scan of myself, so I wanted to know how to make decent scans – and, of course, give Dylan a good one, because we was always missing some parts.

After carefully looking at Dylan doing it, I realized that I would angle the iPad way more than he would when I was scanning, as you can see in the pictures below.

So I tried keeping it 90° from the floor, except for when the topography specifically needed otherwise, and it worked out just fine.

This was so much fun, I love it. I really hope I’ll have some animated 3D version of me doing weird things in the internet soon enough.

Honestly, not being familiar with the way that US American laws work, I got pretty lost in some part of the readings, and most of the topics seem very far from my reality, so I’ll try taking it to less specific areas.

For actresses and actors, I believe this change in their careers is nothing different than what happened when television and film were popularized. We now have other functions for them, and that is only one possibility into the many others we already have.

I like the idea of having 3D versions of people not only as a possibility in the arts, but also as an affective memory. I would love to have a 3D model of my grandmother to virtually walk around with, but the most important question here, for me, is consent. It is an eternal discussion, but who is able to consent for a use that realistic of the image of someone deceased?

Also, we are deep down in the word of modified memories and fake news, so how much can we change in the collective impressions of a certain person, or even modify the doings of someone that wouldn’t have the time to clarify?

Ethics in avatars goes way further than individual rights to image, it can influence huge crowds in the speed of internet.

documentation of what passes through me during my masters